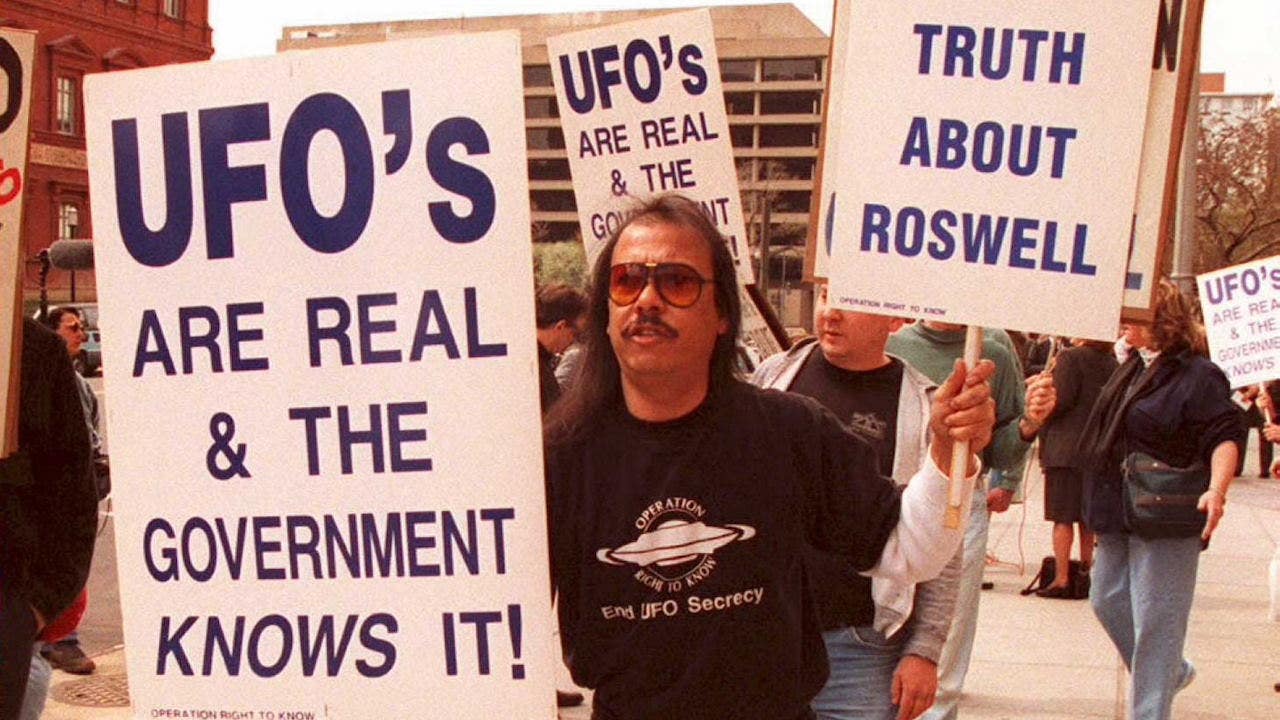 WASHINGTON, DC – MARCH 29: A group of protesters march past the General Accounting Office (GAO) on March 29 to raise awareness of a GAO-led review for documents from a weather balloon crash in Roswell, NM in 1947. E

Chicago – It all started with balloon debris. Or at least that’s what they want to you to think. The 1947 “Roswell Incident” marks its 75th anniversary this week, and few government conspiracies have sparked such a lasting legacy in pop culture.

From the TV show “Rowell” to the subplots in “Independence Day” and “Star Trek: Deep Space Nine” to the new original Tubi documentary “Extraterrestrials, Abductions and UFOs: Roswell at 75”, the Roswell incident is the uncommon inspiration for a wide range of science fiction stories. We probably wouldn’t have ‘The X-Files’ without it, and Jordan Peele’s upcoming horror flick ‘Nope’ seems to take inspiration from those classic flying saucers as well, just in time for the anniversary.

The initial incident took place in July 1947, amid a “flying saucer craze” across the United States of America. Upon hearing of the then novel idea of ​​flying saucers, a New Mexico rancher named WW “Mac” Brazel thought differently of scraps of foil, rubber, and wood he found strewn on a square mile of his ranch a few weeks earlier. He reported the debris to the sheriff, who called Roswell Army Airfield, who eventually forwarded it to Fort Worth Army Airfield. And the fate of the conspiracy theory was sealed on July 8, 1947, when the RAAF issued a press release referring to the debris as a “flying disc”.

Interestingly enough, once a second press release clarified that the debris was actually from a crashed weather balloon, the whole story quickly faded from public attention. But it was revived in a major way in the late 1970s, when the “Roswell incident” grew to encompass a host of the conspiracy theories we know and love today – including those stories of alien autopsies conducted at Area 51.

It was ufologist Stanton Friedman who renewed his interest in Roswell after speaking with retired Lt. Col. Jesse Marcel, who had accompanied the debris to Fort Worth and claimed the government had ordered him to conceal its true nature. . The following year, an interview with Marcel was featured in the 1979 documentary “UFO’s Are Real”, co-written by Friedman. This sparked a massive wave of bigger and bigger conspiracy theories. And while most of it has been debunked (the 1947 debris likely came from Project Mogul, a top-secret military surveillance program that tracks Soviet atomic bomb testing), that hasn’t slowed down the alien theory over the years.

by Tubi “Aliens, Abductions and UFOs: Roswell at 75” is the latest documentary to delve into mystery fun – linking the classic Roswell story to ancient and contemporary claims of alien aircraft sightings. The documentary also features interviews with eyewitnesses, ufologists, and even those who claim to have been abducted by aliens.

Oh, and if you’re ever looking for an unusual vacation destination, the town of Roswell has really leaned into its UFO conspiracy theory fame with museums, events, and attractions. The official seal of the city even features a little green man.

You can watch “Aliens, Abductions, and UFOs: Roswell at 75” streaming for free on Tubi — get the app

Make it a UFO double function with “infinity,” free streaming on tubi

infinity (2017): Directing duo Justin Benson and Aaron Moorhead specialize in lo-fi, high-concept indie sci-fi. And “The Endless,” about two brothers who return to the UFO cult compound where they grew up after receiving a mysterious VHS tape in the mail, is perhaps their best movie yet. It’s a well-crafted and ingeniously shot film, incorporating mysterious spots, time loops, and unseen energies that defy the laws of physics into a story where you genuinely care about the characters as well as the strange forces that shape their fates. Rated TV-MA. 111 minutes. Real: Justin Bensonand Aaron Moorhead. With: Justin Benson, Aaron Moorhead, Tate Ellington, Callie Hernandez, james jordan.

“The Endless” is streaming for free on Tubi — get the app

About the writer: Caroline Siede is a film and television critic in Chicago, where the cold never bothers her anyway. A member of the Chicago Film Critics Association, she spent four years lovingly analyzing the romantic comedy genre, one film at a time, in her When Romance Met Comedy column for The AV Club. She also co-hosts the film’s podcast, role calland shares his views on pop culture on Twitter (@carolinesiede).

About Tubi: Tubi offers over 40,000 movies and TV series from over 250 content partners, including all major studios, in addition to the largest offering of free live local and national news channels to stream. The platform offers fans of entertainment, news and sports an easy way to discover new content that is completely free.

Both Tubi and this TV station are owned by the FOX Corporation.