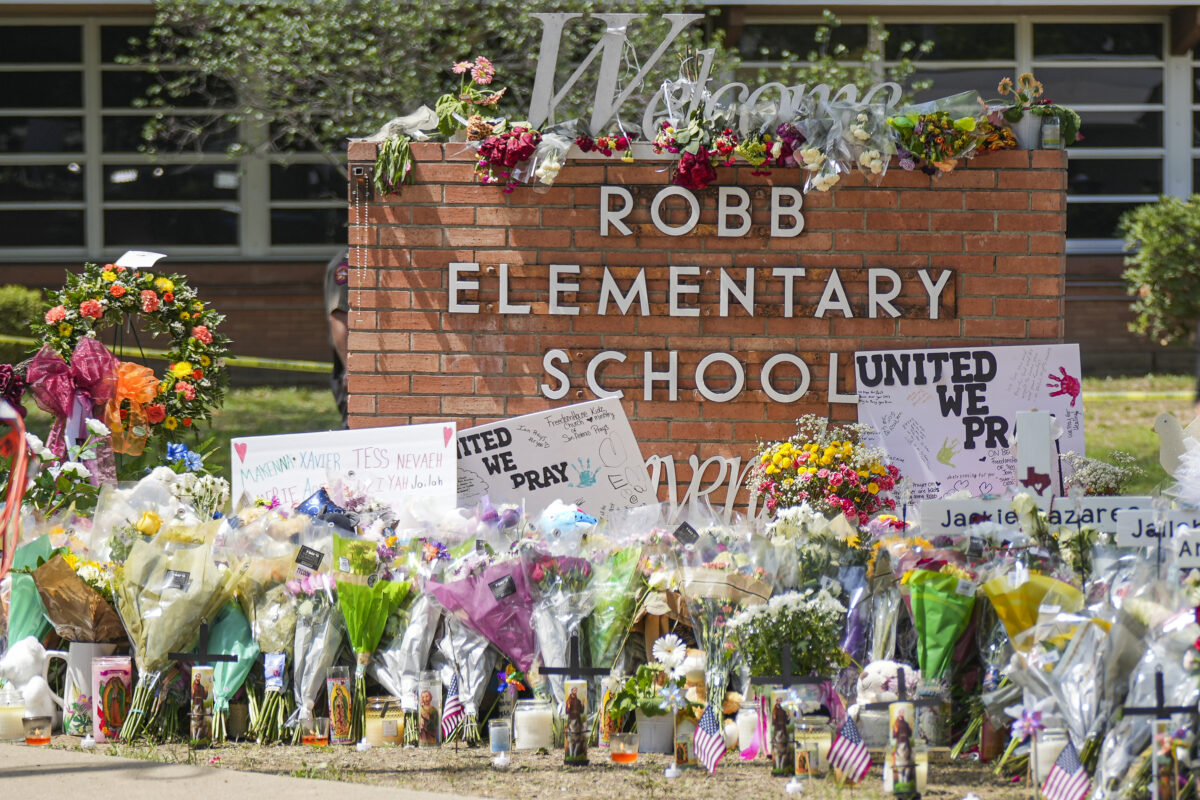 Every decent human being is grieved by the horrific murder of 19 fourth graders and two teachers at Robb Elementary School in Uvalde, Texas. In the wake of the targeted atrocity, the usual commentators jumped in to make the usual arguments about the need to restrict gun ownership or, on the other side of the political spectrum, to train and arm the teachers to protect against intruders. Everything is so predictable, depressing and banal.

Now is the time to analyze the causes of this event from a broader perspective and to understand that a society in which schools are repeatedly attacked is profoundly unhealthy for children, well beyond the very slight risk of being the victim of a school shooting.

Let’s start with abortion. Whatever one thinks of Roe c. Wade, there’s no denying that more than 60 million newborn humans have been killed in the womb since the Supreme Court invoked a constitutional right to terminate a pregnancy. It is not morally without consequence.

What is the connection between abortion and Uvalde? Mother Teresa would tell us. At the National Prayer Breakfast in 1994, she said, “It really is a war on the child, a direct killing of the innocent child, a killing by the mother herself. And if we accept that a mother can kill even her own child, how can we tell others not to kill each other?

I used to regard these statements as pro-life hyperbole. But I realize now that this is not where the saint was coming from. I think she was saying that the pervasive use of abortion has created a general cultural atmosphere that is both anti-child and, in the extreme, encourages violence.

Think of the dehumanizing arguments we often hear that the unwanted pregnant baby is a “parasite”, similar to a tumor that needs to be excised. Such dehumanization of offspring has implications for attitudes within the culture that go far beyond the problem itself.

Even advocates who aren’t so crudely anti-pregnancy often argue that the lives of unwanted babies conflict with the mother’s future happiness. For example, actress Uma Thurman wrote in the Washington Post that she wouldn’t have become a movie star if she hadn’t aborted her first child, which she says paved “the way to life.” full of joy and love that I have experienced”, which includes three children she has delivered.

I understand this argument. But his current joy always came at the cost of the death of an innocent. Abortion rights may allow women greater freedom, but regardless of the legality, it seems to me that Mother Teresa’s thesis that it also releases dangerous nihilistic social forces can no longer be ignored.

But even if Mother Teresa was all wet — after all, other Western countries that allow abortion aren’t as violent as ours — it’s getting harder and harder to label our country as “child-friendly.” Think of the toll inflicted on children by our anti-COVID policies, under which children in many states have been excluded from school, even though COVID-19 poses few serious risks to their health. The consequences have been devastating. As studies have shown, our children were not only severely stunted in their academic progress, but the loss of socialization also dramatically increased childhood depression, opioid abuse, mental illness, and suicide rates in young people.

Speaking of youth suicide, the numbers were skyrocketing even before schools closed due to COVID-19. According to the National Alliance on Mental Illness, suicide is the second leading cause of death among people aged 15 to 24. Nearly 20% of high school students report serious suicidal thoughts and 9% have attempted suicide. Even more surprisingly, suicide is the eighth leading cause of death among children aged 5 to 11! Something is seriously wrong when so many children are in such existential despair that they believe the best solution is to cease to exist.

The transgender panic offers another example of how we are willing to harm children in the name of advancing adult interests and causes. Children with gender dysphoria have their puberty blocked, with active support from medical societies and promotion from the US government. But France’s National Academy of Medicine (pdf) has identified potential side effects of blocking puberty, such as “impact on growth, weakening of bones, risk of infertility, … and for girls , menopause-like symptoms.

Wait, it’s getting worse. Some girls who identify as boys are even mutilated with mastectomies while children of both genders may undergo “bottom line” surgeries that leave them sexually dysfunctional and physically infertile – this despite the lack of an objective medical test that can tell doctors which patient is experiencing “flares”. gender dysphoria” and who suffer from “transient adolescent dysphoria”.

Advocates of these radical interventions say they want to prevent suicide. I’m sure they do. But I suspect other, more adult agendas are also at play. What else explains the angry objections of activists and President Joe Biden to a new Florida law that simply prevents these issues from being discussed in kindergarten to third grade?

This leads us to the deeply inappropriate sexualization of our young people, which can also negatively impact their emotional well-being and mental health. Children have easy access to obscene pornography on the Internet, which, according to reports, can distort the development of healthy sexuality. Specifically, child protection advocate Rebecca Friedrichs warned against children’s books and educational programs that promote early sexualization, including masturbation lessons and the use of sex toys. , encouraging “sexting” and “videos that indoctrinate 10-year-olds.” on a range of gender choices. No wonder the number of children expressing gender confusion has increased exponentially in recent years, a disturbing phenomenon multiplied by the pernicious influence of peer social media.

Not that some of the institutions supposed to convey traditional values ​​from generation to generation can despise the radicals. The Catholic Church, Southern Baptist Church (pdf), and Boy Scouts have all covered up child sexual abuse by clergy and lay leaders, clearly placing institutional reputation above child safety. Ashamed.

There is much more to worry about than I can detail here. What about the break-up of families that leads to so much infantile misery? And the ubiquitous number of “fatherless” homes that put boys at particular risk of antisociality and even serious mental illness – which, uncoincidentally, appears to have been the case with the Uvalde shooter. Hell, if we really cared about children, the country would be reeling from the number of young people murdered on the streets of Chicago, a toll that far exceeds the number of children killed in schools.

And what are we to make of reports that at Robb Elementary, like Parkland High School in Florida, police refused to enter the building even as children were being shot? If you had told me when I was a kid that law enforcement would put their own safety above mine in such a circumstance, I wouldn’t have believed it.

Then yes. mourn the victims of Uvalde. Let’s discuss how to prevent a repeat of the carnage. But we must not stop there. If we want to make our country a healthy place for children, we also need to reassess our priorities as adults and take a hard look at what our culture has become.

Award-winning author Wesley J. Smith is host of the Humanize podcast (Humanize.today), president of the Discovery Institute’s Center on Human Exceptionalism, and consultant to the Patients Rights Council. His latest book is “Culture of Death: The Age of ‘Do Harm’ Medicine.”