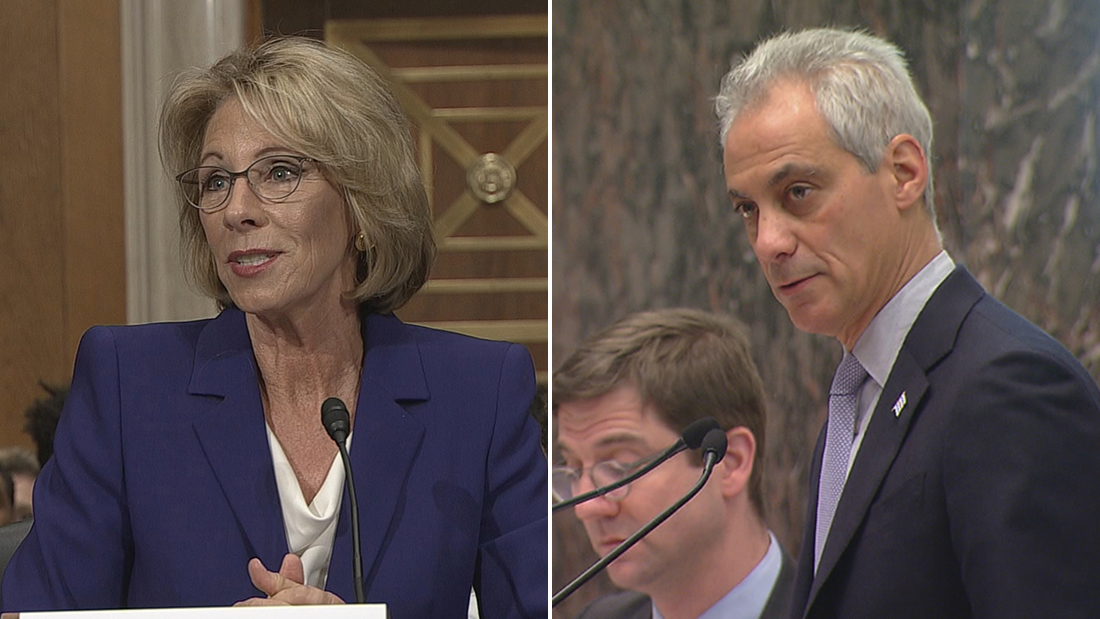 Mayor Rahm Emanuel and US Secretary of Education Betsy DeVos met in the nation’s capital for a “wide-ranging” discussion Wednesday morning, centered on the way forward for education in Chicago.

â€œI want to thank Mayor Emanuel for today’s conversation and for sharing his vision for education in the city of Chicago,â€ DeVos said in a statement.

â€œI look forward to continuing to find ways in which the department can work with the Mayor’s office to ensure that Chicago students have access to the highest quality education possible. I applaud the mayor for increasing Chicago’s high school graduation rates and his commitment to providing more students with new opportunities through dual enrollment programs.

A request for comment from Emanuel’s office was not immediately returned. Chicago Public Schools declined to comment on the meeting, but noted that its dual enrollment program has grown from 15 schools to 60 in the past five years and currently serves more than 4,200 students in the district.

Ahead of the announcement of their meeting, the mayor said he planned to send a pair of studies from the UChicago Consortium on Academic Research to DeVos and President Donald Trump detailing improvements in CPS graduation rates and of university perseverance.

It came after Trump was quoted as saying According to the Chicago Sun-Times, the graduation, college and career readiness figures in Chicago and other major cities are “very rough.”

Last week, Emanuel also introduced a new graduation initiative for CPS students, requiring high school graduates to have a post-secondary plan in place to graduate. If approved by the Board of Education, this program will go into effect from 2020 graduates.

Betsy DeVos, Mayor Emanuel is due to meet on Wednesday

April 10: The mayor of Chicago and the US secretary of education have a meeting scheduled for Wednesday morning at 10:30 a.m. But the place and content of their speech are not yet known.

Emanuel calls for school quality rather than school choice in editorial

December 19: Days after Rahm Emanuel and President-elect Donald Trump met in New York City, the Washington Post on Friday published an editorial written by the mayor of Chicago in which it called on state and federal partners to focus on improving academic excellence rather than the choice of school.