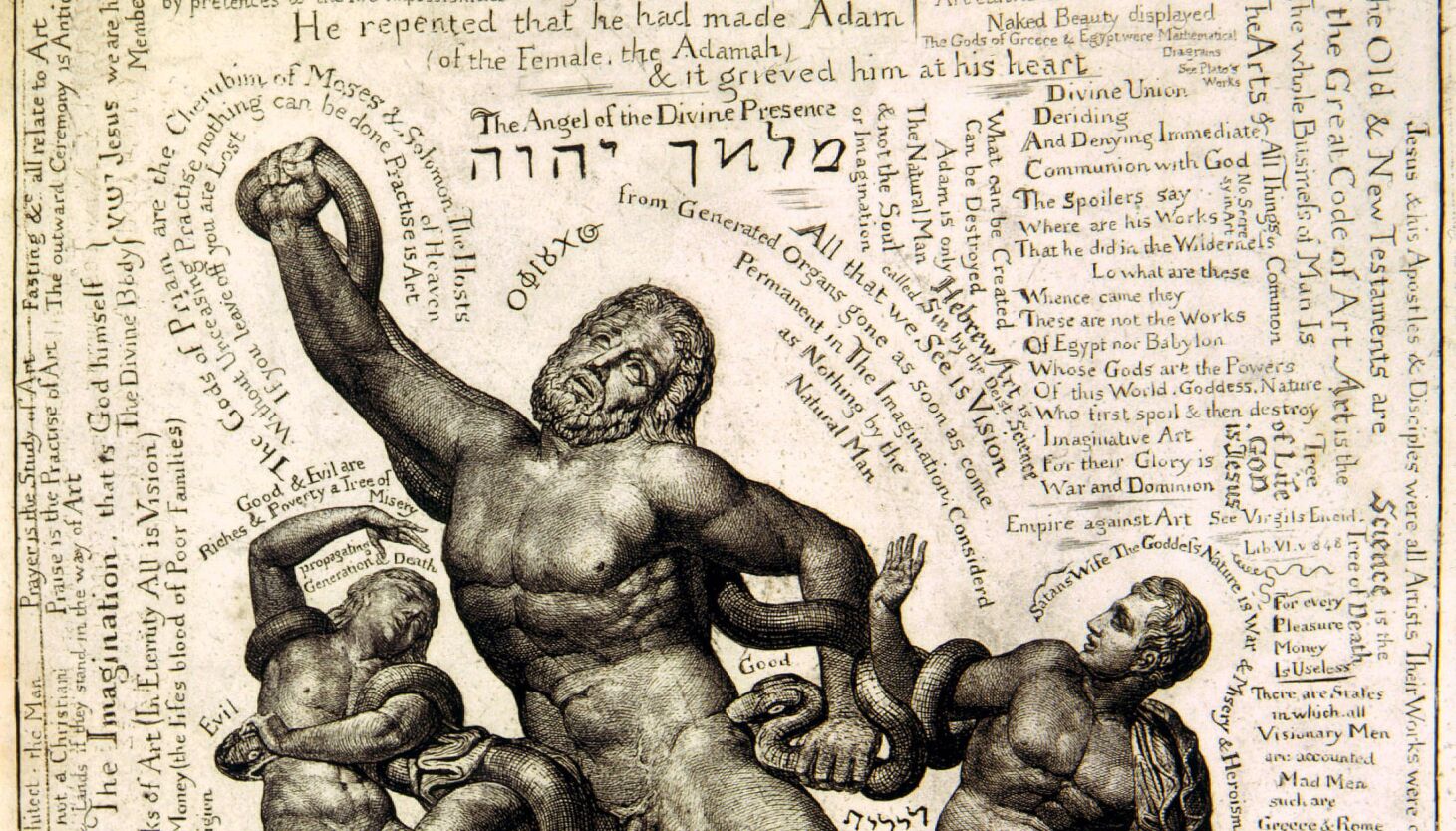 William Blake’s engraving of Laocoon and his sons is what art historians call “busy”.

OK, I doubt art historians would call it that. Doing what journalists call “verifying” – consulting the Journal of Aesthetics and Art Criticism – I see that the preferred term seems to be “cluttered”.

So, cluttered, then. Whatever you call it, there’s plenty to unpack. Not just the unlucky Trojan priest, who tried to warn his fellow citizens not to take that great wooden horse into the walls of Troy, and was rewarded by being crushed, along with his sons, by a sea serpent sent by Athena .

But all this written, in several languages. A talkative guy, Blake. Which I guess makes us kindred spirits. I continue.

Although today, I am only interested in one line, written perpendicularly in the right margin: “Is not all Vice possible to the Man openly described in the Bible?”

The only honest answer must be a “Yes!” resounding! Murder, to begin with (Cain). Incest (Lot). Drunkenness (Noah). Sell ​​your brother into slavery (Jacob). Debauchery, cheating, theft, war. Onan spills his seed. God tortures Job like a lark.

The entire book is practically one long grindhouse movie. Yet, do school boards ban the Bible? Never. Why is that? Perhaps because such prohibitions never concern the pretexts supposed to inspire them.

Earlier this year, when Art Spiegelman’s Holocaust graphic novel “Maus” was removed from an 8th grade reading list in Tennessee, school board members cited “nudity.” How is nudity considered in cartoon mouse designs? With a straight face, I mean. It’s like complaining that Disney’s Winnie the Pooh doesn’t wear pants. Maybe it’s next.

Silencing the Holocaust is actually relatively rare. School libraries across the country mostly pull books that suggest some people are gay or transgender, which they are, spoiler alert. These adults seem afraid that heterosexuality is such a lighthearted fantasy that any second grader reading a book about a penguin with two fathers might be lured out of the way.

Earlier this week, Trump wannabe and Florida Governor Ron DeSantis signed his “Don’t Say Gay” law banning public school teachers from discussing gender identity with students in grades 2 and under. Age is essential to the scam, the law intended to skate on the youth of the targeted students, playing on subconscious Victorian notions that sexuality is a gift received on your wedding night, and ignoring the sheer bigotry of the law.

It’s as if Illinois had passed a law prohibiting pedestrians from saying “Hello” to any Catholic child they pass, it would be a mistake to then fall into the debate about whether strangers should approach children unknown and if so at what age. The bottom line would be for the law to ostracize a particular group for no good reason; age is irrelevant.

This is not how confident people behave. My boys were born in East Lakeview, an area sometimes known as Boystown. While I wasn’t thrilled with the kind of magazines prominently displayed in newsstands their stroller passed, they didn’t seem to notice, and I didn’t stink. Sexual orientation is ordained by nature – by God, if you will. It’s not something you pick up while reading.

I take comfort in this: the terrifying enemies have lost. That’s why they do this. Generate votes among those who are similarly terrified; all broken bullies, in a desperate scramble of junkies, trying to find someone they’re allowed to punch.

Sad. The integration of oppressed races, religions and genders is one of the great moral triumphs of the last century. Too bad the so-called cleric didn’t get the memo. Too bad Blake isn’t there to capture their confusion.

His “Pity” painting should do the trick. It is inspired by Macbeth, contemplating the murder of Duncan: “And pity, like a naked newborn/Striding the blast, or the cherubim of heaven, riding the blind couriers of the air/Blasting the horrible act in every eye.”

Say what you will about social media, they do a great job of blowing horrible deeds in our eyes. From Putin’s butchery to every creepy bleat and grimace of every remote school board. It can sting, make us blink sometimes – all the time it might seem. But at least we know.