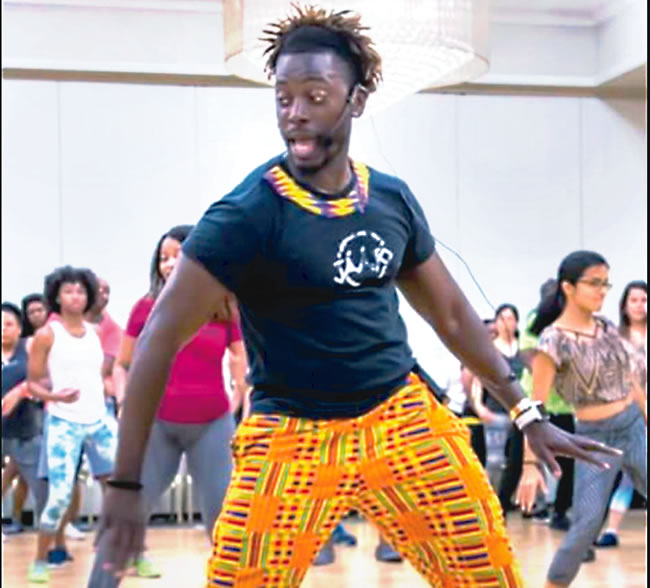 I dance to spread joy, well-being and culture —Afrovibes

Rasaq Lawal, who goes by the professional name Afro Vibes, is a US-based Nigerian dancer who believes in the transformative and healing properties of dance. He talks about his dance journey, his preference for Afrobeats, his upcoming workshop in Lagos, and other issues in this interview. Excerpts:

TELL me all about your dance journey. Why this art form in particular?

Dance and music have always been part of my life. My dance journey started as early as I can remember. My earliest childhood memory was of me dancing at age four in my aunt’s living room in Ijesha. I vividly remember trying to moonwalk in slippery white socks on my aunt’s brown carpet while the MTV Awards were playing in 1989 and Michael Jackson performing Smooth Criminal. At my 5th grade prom in Brooklyn, New York, I braved the cafeteria dance floor and danced alone for 10 minutes while the rest of the class stared in awe on the dance floor. cafeteria empty. A few minutes later, everyone was on the dance floor because of my courage and my natural inclination to dance. Ironically enough, it was harder for me to sit down and talk than to dance and enjoy the music.

I followed in my sister’s footsteps when I attended the Supreme Education Foundation in Magodo. I started doing mime performances which led to Michael Jackson impersonations. And when I attended Dulles High School in Houston, Texas, I also performed as part of the Hip Hop group in our multicultural student showcase. When I attended college in Lexington, Virginia, I started the first hip-hop dance group at Washington and Lee University. I was in the inaugural class of dance minors in college. Shortly after graduating, I auditioned and took part in the celebrity judges’ round of “So You Think You Can Dance.” I’ve played for Grammy nominated musicians like Three 6 Mafia, Wizkid and opened for Ice Prince in Houston, TX. I started my dance business in 2013 with a mission to spread joy, well-being and culture through dance and music. Almost 10 years later, I am thrilled to be dancing with my people in my hometown of Lagos, Nigeria.

For me, dance is more transformative than performative. In other words, while dance is great for performance, I’m more interested in how dance can transform your mind and body. I believe dance has the power to transform and heal people. Anatomy has scientifically proven that movement is the natural state of the human body. When you stop moving, you die. I love the art form of dance because you can use it to express yourself while decreasing trauma, stress, depression, and many other mental health symptoms. It is a dance form that naturally attracts people’s attention. When practiced often, it can be great exercise and improve mental well-being.

How has it been since you started; is this your main source of income?

I started my dance business in 2013 in Houston, Texas, and it’s been a roller coaster ride with lots of corresponding ups and downs. I’ve had some great opportunities, like performing on the One Africa Music Fest Tour under the legendary Kaffy and alongside dance powerhouses like Sayrah Chips. I also gave lessons for free and had to look for parts in my car to pay for gas to get home, while having no money for rent. I have been fortunate enough to host several hundred dance events. I have taught as a special guest instructor for dance conferences across the United States. One of my greatest accomplishments was being featured on FOX News for Afro Latin Conference and being on the Celebrity Judges Round for So You Think You Can Dance Season 9. I was privileged to receive many accolades, but the most rewarding experience for me has been building dance communities made up of people who are passionate about dance, health and wellness.

I have worked as a dance teacher in elementary and high school for the past five years. I am currently the Director of Student Development at Musicopia and Dancing Classrooms Philly, a non-profit organization that teaches Philadelphia-area students values ​​and life lessons through music and dance programs.

I know you are in the United States, where there are liberal opinions; how did your parents and siblings react to your decision to pursue a career in dance?

My parents naturally didn’t like the idea of ​​me having a career in dance, and they were right! It was a tough journey, and I did it the hard way in hindsight. However, my passion for dance survived the many adversities I had to face. My parents first pushed me to pursue my career in a different way, going through the academic route and obtaining a master’s degree and a doctorate in dance, but I found it more fulfilling to approach my passion by trial and error. Although the path I took was not as prestigious or financially rewarding, I found that I was able to learn so much about myself, building community locally and in the field. dance.

Are you based in a specific state or do you run your dance programs across the United States?

I am currently based in Philadelphia, but over the past 10 years I have taught in seven states; New York, New Jersey, California, Texas, Illinois, Louisiana and Pennsylvania and 11 cities. These include Pittsburgh, Philadelphia, Harlem, Chicago, New Orleans, Austin, Houston, Oakland, San Francisco, Moorestown and Chicago.

Why the preference for Afrobeats and Afrovibes as a professional name?

Afrobeats is a unique genre for me. Afrobeats has hooked me ever since I first heard ‘Shake Bodi’ by Tribesmen when I was in college in Agidingbi, Ikeja. I feel a special connection to Afrobeats because it represents me in a way that no other musical genre ever could. As a Nigerian who has traveled extensively and been influenced by many cultures, I am always in awe of how Afrobeat music merges different elements of the world to create a magical, catchy and globally celebrated sound. Just as Afrobeats came from the motherland and is championed around the world, I also aspire to see my dance classes do the same in the next 10 years.

I chose Afrovibes as my dance brand name because it perfectly encapsulates my mission to use Afrobeats music and African culture to promote joy, health and well-being in communities around the world. The “Afro” encapsulates the use of Afrobeats music and African culture in my classes and programs, and the “vibes” encapsulates the feeling of zen and joy of dancing to great music in a group setting. This vibration or good feeling is scientifically the dopamine released in your brain when you engage in an intentional happy dance or any other activity that you truly enjoy.

You will soon be organizing a dance program in Lagos. Tell me about that and the goals.

I am giving a dance class at The Body Language Company, 53 Adeshiyan St, Onipanu, on Saturday August 6th at noon. The goal of the dance session is to share with people of all ages and sizes an hour of joyful movement, meditation and joy. Some by-products will also be exercise and networking, but these are not primary goals. Most importantly, people can dance in a fun, easy-to-follow class that leaves you sweaty, happy, and connected.

What are your expectations of the workshop?

They are threefold; people come out to have a fun and joyful dance experience. It will be a bonus for me if I can inspire attendees to keep engaging in healthy activities they love like walking, biking, dancing, etc. as part of their health and well-being. I look forward to returning to Nigeria, hosting more dance classes, and connecting with communities of people who are passionate about dance, health, and holistic wellness.

The PDP spokesperson recalled how the opposition party had repeatedly warned that the APC government had ceded sovereignty over much of our country to terrorists, “many of whom were imported into our country by the APC”.

He further stated, “According to the video, in a brazen manner, terrorists as non-state actors boldly showed their faces, bragging, admitting and confirming their participation in the Kuje prison breakout, some of whom were former detainees who were either imprisoned or incarcerated. awaiting trial for their previous act of terrorism against our country.

“Nigerians can also recall the admissions of Kaduna State Governor Mallam Nasir el-Rufai that the APC government knows the plans and whereabouts of the terrorists but failed to act.

According to Ologunagba, around 18,000 Nigerians have been killed by terrorists between 2020 and 2022 “as the criminals continue to be emboldened by the failures and obvious complicity of the APC and to which the PDP had always drawn attention” .

“It’s not politics; it’s about humanity and leadership, which is sadly and sadly lacking in our country right now,” he said.

The PDP added that it is appalled by “the lame response of the seemingly helpless, distraught and deflated Buhari presidency, in which it told a dying nation that President Buhari “has done everything and even more than expected. he was expected as Commander-in-Chief by way of sustaining the morale, materiel and equipment of the military…”

“This is a direct admission of incapacity and failure on the part of the Buhari presidency and the APC. At such a time, in other climes, the president directly leads the charge and takes drastic measures to save and protect its citizens.

“In times of adversity, the president transforms himself into a chief comforter to give hope and help to the citizens. Painfully, Nigeria does not have a president who cares and can present himself as the chief comforter of the people.

“It has now become very imperative for Nigerians to take notice and realize that the only solution to this unfortunate situation is to hold the APC government accountable. We must unite as people regardless of our political, ethnic and nuns to resist the fascist tendencies of the APC administration.

Ologunagba called for an urgent meeting of the National Council of State to advise on the way forward in the face of worsening insecurity in the country.

“Our nation must not fall. The resilient Nigerian spirit and positive attitude must be rekindled by all to convince the President to immediately and without further delay accede to the request of the PDP and other well-meaning Nigerians to convene an extraordinary session of the National Assembly. Council of State to find a lasting solution since the president is, by his own admission, at the end of his tether,” the PDP spokesman said.