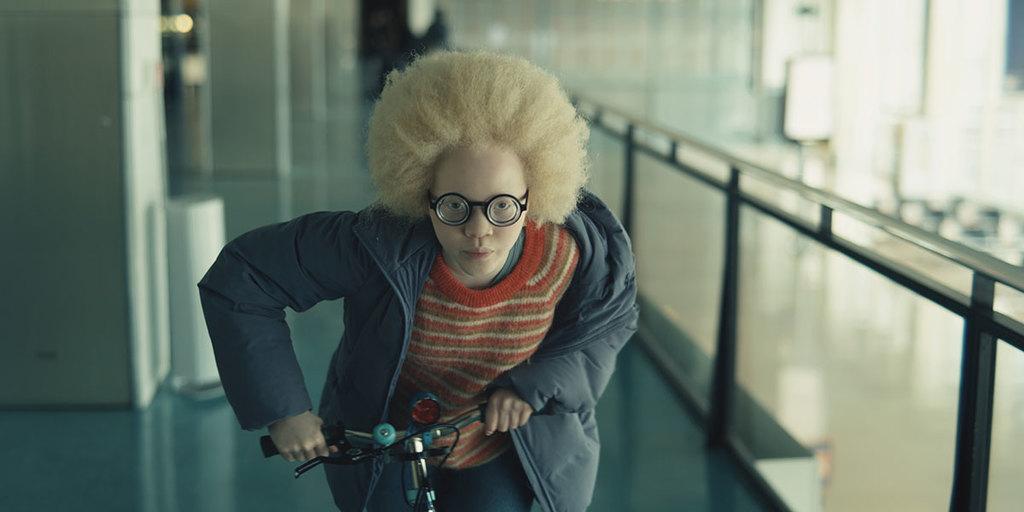 Mark “back to school” with French Culture in September

Now that the new school year is well underway, the cultural scene is coming back from its summer (and Covid) slumber. Across North America, September is a month filled with festivals, performances and new exhibits. So sharpen your pencils, hoist your backpack, and venture out with our guide to all things French for fall.

Explore the concept of beauty in words and pictures

French artist, writer and philosopher, Sophie Calle has built her long career around the interplay between word and image, imagination and representation. In 1986, she asked members of an institute for the blind in Paris to share their ideas on beauty. The resulting installation, “The Blind,” featured excerpts from these intimate conversations alongside photographs of the subjects and images of things they described or imagined as beautiful. The Art Institute of Chicago recently acquired the only all-English version of this work, which is now on display for the first time since that original exhibition, alongside a recent interactive work, “Because.” In this piece, also playing with what we read and see, Calle’s personal descriptions of why she made certain photographs are embroidered onto woolen fabrics, which the visitor must lift to see the image. On September 23, curator Matthew Witkovsky gives a lecture on the exhibition at the museum.

A highlight of the New York cultural calendar, the 15th incarnation of the French Institute–Alliance Française cross the line The festival starts on September 9 and ends at the end of October. This festival of dance, music, theater and art, organized by Florent Masse and Mathilde Augé, is dedicated to new performances that push boundaries and confront pressing questions of identity and global politics. The festival brings cutting-edge French and Francophone performances to the United States and fosters the exchange of ideas between international artists and those based in New York. The shows “exemplify the spirit of inclusion that inspired us,” the curators say, featuring “underrepresented artist casts and a mix of professionals and non-professionals.” Throughout the festival, “Clin d’œil”, an exhibition by Senegalese artist Omar Ba, is presented at the FIAF gallery at 22 East 60th Street. September highlights include Marion Siéfert’s hybrid theatrical and Instagram performance, ‘_jeanne_dark_’ (pictured) in which a teenager bullied for her virginity (Helena de Laurens) reinvents herself online in real time. Suitable for audiences aged 14 and up, the play depicts the audience’s role in shaping the protagonist’s reality.

From September 9 to October 28, dates and locations vary.

Immerse yourself in the buzzing atmosphere of a major film festival

The 2022 film festival schedule is once again jam-packed with in-person screenings and red carpet drama. In Toronto from September 8, the beloved TIFF World Jamboree, now in its 47th year, provides one of the friendliest showcases in North America and a reliable indicator of Oscar buzz. Around 200 feature films and 40 short films make up the busy schedule, and the French and French-speaking lineup – more than 50 films this year – is particularly robust. The festival will include several world premieres by French directors, including Benjamin Millepied’s new interpretation of Carmen and Christophe Honoré winter boy, with Juliette Binoche and Paul Kircher, a semi-autobiographical tale of a queer teenager on the cusp of adulthood whose life is turned upside down by tragedy. In Hawaii, of cute director Maïmouna Doucouré, another troubled teenager (Sania Halifa, top) decides that her only way out of her situation is to convince Michelle Obama, visiting Paris, to adopt her. Elsewhere in the city, the Franco-Burkinabe director Cédric Ido Gravity (pictured above) imagine the fallout when a mysterious cosmic event upends the atmosphere – literally – of the suburbs.

Celebrate the “joyful ride” of the new French theater

After two years of virtual performances, the Alone on Stage Princeton University’s French Theater Festival returns in person this month, “spotlighting diversity and female artists,” according to its curator Florent Masse, senior lecturer in the Department of French and Italian, who also co-organizes the FIAF cross the line festival. Alone on stage, in collaboration with the Festival d’Automne de Paris, brings together the talents of established and early-career actors and directors, presenting local audiences and the university community with exciting new productions, primarily in French with English surtitles . “Since its creation in 2012, Alone on stage has been a joyous ride every year,” says Masse. It starts in September with stalliona humorous celebration of courage and pop culture, about a secretary inspired to recommit to her medical training through the cinematic inspiration of Rocky III. Other performances confront more challenging stories about new beginnings and the interplay of personal and political liberation. Don’t miss Angela Davis a history of the United Statesa multimedia musical performance in which actress Astrid Bayiha (photo) plays the activist, teacher and author of the civil rights movement of the 1960s and 1970s.

After a Covid-interrupted tour of several North American campus galleries, the dazzling exhibition Taking Shape: Abstraction from the Arab World, 1950s–1980s lands this fall for its final exhibition at Northwestern University’s Block Museum. Featuring a wide range of paintings, drawings and sculptures from the Middle East and North Africa, created during the turbulent and transformative postcolonial period, the exhibition invites visitors to rethink the history of modernist abstraction . Across the wide spectrum of the Arab world at the end of the 20th century, the anti-figurative traditions of Islamic art meet and merge with Western modernist rejection of representation, to create that art that feels rooted in history. and geography but exciting and new. Several artists from the former French enclaves of Algeria, Tunisia and Morocco, including Ahmed Cherkaoui, whose 1965 painting The Red Mirrors is pictured above – featured in the exhibition, which is drawn from the collection of the Barjeel Art Foundation in Sharjah, United Arab Emirates.

Scary! Two of America’s best haunted attractions are in Illinois