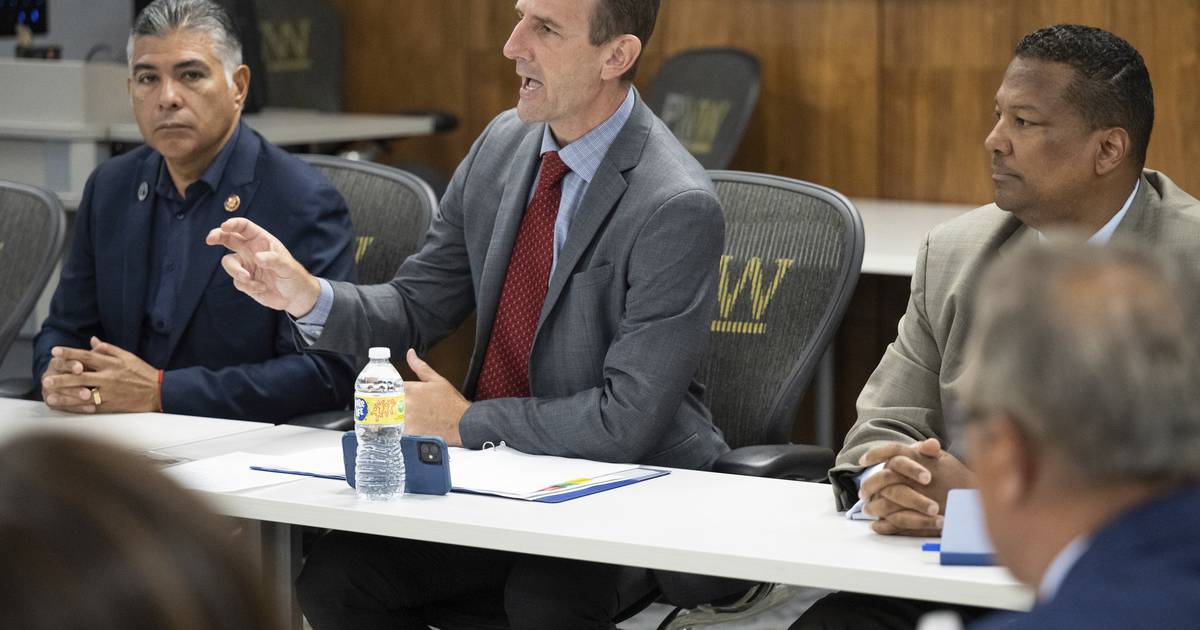 According to several Latino leaders in northwest Indiana, the federal government — and especially the Democrats — needs to better communicate what it is doing for the Latino community.

Too many people don’t know about the programs that exist to help them, or no one alerts anyone if a program disappears, they told U.S. Representative Frank J. Mrvan, D-Highland, during a roundtable Wednesday after- noon at Purdue Northwest. U.S. Representative Tony Cardenas, a Democrat who represents California’s San Fernando Valley, and Indiana State Representatives Michael Andrade, D-Munster, and Earl Harris, D-East Chicago, joined Mrvan for the discussion.

All four lawmakers agreed with this sentiment.

“Democrats are horrible at talking about our wins,” Cardenas said. “But we have to admit that there is an equation here, and we need other people to talk (on these topics as well).”

Community leaders discussed several different topics, such as immigration, education, food insecurity, and driver’s licenses for undocumented people so they can get to work, school, etc. Cardenas, who was first elected to the House during President Barack Obama’s second term, told the group not to expect anything on U.S. Senate immigration for the foreseeable future because Senate Republicans “are not budging.” not” because they use immigration as a negative, even though it would be beneficial for lowering inflation.

That’s not to say no one is working on anything — it just needs to be done smarter, Cardenas said.

“When we wrote DACA (Deferred Action for Childhood Arrivals), Obama told us to write it from our point of view, so we did, and we argued a lot about it,” said Cardenas said. “We wanted him to save a lot of items, and he pushed back hard, but he was right. We didn’t get everything we wanted, but (DACA) is also still intact to this day.

From this experience, the Hispanic Caucus has learned that with the political climate as dire as it is, they know they have a better chance of inserting pieces of legislation into bills rather than betting on bills. full bills, although they still try to get full bills. past, Cardenas said.

Rosalva Robles, a NIPSCO official who attended on her own behalf, said when federal leaders talk about the things they’ve accomplished, they’re talking about them on a macro level that involves politics, in which most Latinos don’t. are not interested. . Additionally, many Latinos are “very conservative” and tend to vote Republican in federal elections, but Democratic locally.

“These people need jobs — they may have a history of drugs or crimes, but they’re ready to work,” Robles said. “What we need is a path for them. They don’t care about politics; they want jobs and security in their communities.

Mrvan said when it comes to jobs, the U.S. bailout includes resources for black and Hispanic communities because they’re the hardest hit. There was money to dredge the Grand Calumet to make the land cleaner and safer in North Lake County, he said; in addition, funds are earmarked for apprenticeship programs in various trades and mental health programs, and the $50 million Ready Grant the state received to help with job readiness.

Vic Garcia, CEO of the Northwest Indiana Food Bank, asked if there would be a cut in funding for the Farm Bill, which covers up to 75% of its produce and directly affects the SNAP (Supplemental Nutrition Assistance Program, or food stamps) and WIC (SNAP for Women, Infants and Children), when discussed next year. Mrvan and Cardenas have said so far that they are not expecting any.

“We don’t spend too much on it, so we can push back,” Cardenas said.

Felipe Oria, a returning PNW student tackling a nursing degree, said he just wanted a reason to stay in northwest Indiana when he’s finished school. He’s been a little on the fence so far, but talks like Wednesday’s help him see the forest through the trees, even if things move slowly.

“I think they have a vision and they value their communities,” he said.

Michelle L. Quinn is a freelance writer for the Post-Tribune.