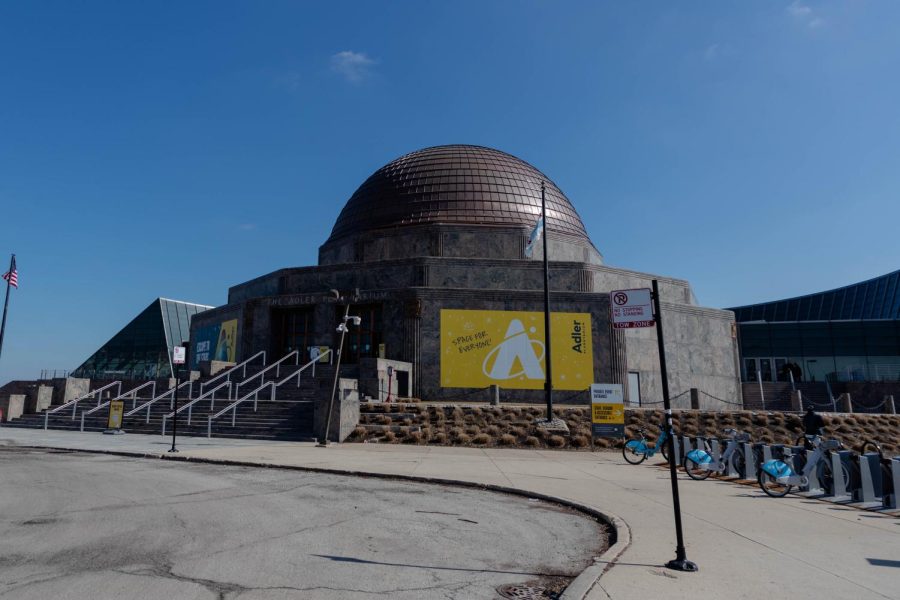 Planets of varying sizes hang from the ceiling of the Adler Planetarium as scientists explain in interactive videos what the universe looks like beyond our blue and green planet. Stars illuminate the ceiling while the inner dome immerses visitors in space, without even leaving their seat.

The Adler Planetarium has been around since 1930, educating visitors of all ages about our world and its connection to space. It is the oldest planetarium in the Western Hemisphere.

While the Adler Planetarium has been open for over 91 years, its roof was over 80 years old, according to senior public relations manager Jennifer Howell. Now the planetarium has a new roof to welcome its guests again.

“We were starting to have issues with the fear that it would affect our collections,” Howell said. “So because we were closed, we were able to take advantage of that, and we have a beautiful new copper roof that will shine for generations to come.”

To welcome its guests back after the March 4 reopening, the planetarium is offering free admission to the museum every Wednesday in 2022 for Illinois residents. Proof of Illinois residency is required. Tickets must be purchased in advance on the Adler Planetarium website.

During the pandemic, the planetarium created interactive and digital content for curious space explorers to learn about space. skywatch wednesday, sky watchers hangout and their space science comedy show Wow! Signal were created to interact with visitors outside the planetarium.

Other additions to the planetarium include its brand new celestial show, imagine the moon. This show came out in 2019 before the pandemic.

“It’s about humanity’s connection to the moon, to our universe, and to our celestial body,” Howell said. “A lot of people haven’t had a chance to see it yet because it came out just before the pandemic.”

The planetarium offers two other celestial shows to visitors: planet ninewhich allows viewers to explore the galaxy in search of a ninth planet, and destination solar systemwhich takes rocket passengers into space, traveling hundreds of millions of miles from Earth.

Before the pandemic, the Adler Planetarium held an adults-only event called Adler After Dark, where visitors could explore the universe after hours once a month.

After some revisions, the Adler Planetarium now offers adler at night — a nocturnal exploration of our stars for all to see.

“We realized that people come to the planetarium because they want to witness being under the night sky,” Howell said. “And it’s hard to do, obviously, during the day. So we changed our hours so that everyone could come. »

Adler At Night is open every Wednesday from 4-10 p.m. for space explorers of all ages. Illinois residents enter free with proof of Illinois ID.

The Adler Planetarium has also partnered with the City of Chicago to create its brand new exhibit, Chicago night skywhich deals in depth with light pollution and its effects on the stars of the city.

“In the city of Chicago, you can only see about 35 stars in the night sky, which is crazy, because there are literally thousands of stars,” Howell said. “[Chicago Night Sky] talks about the work the Adler Planetarium is doing with the City of Chicago and how we’re working with them to work on local issues in the city and restore some of our night sky, so Chicagoans can see more of our universe. ”

To learn more about our galaxy and the evolution of space science, visit Adler Planetarium website for tickets.

VSU chairman selected to Biden’s advisory board for HBCUs | Education