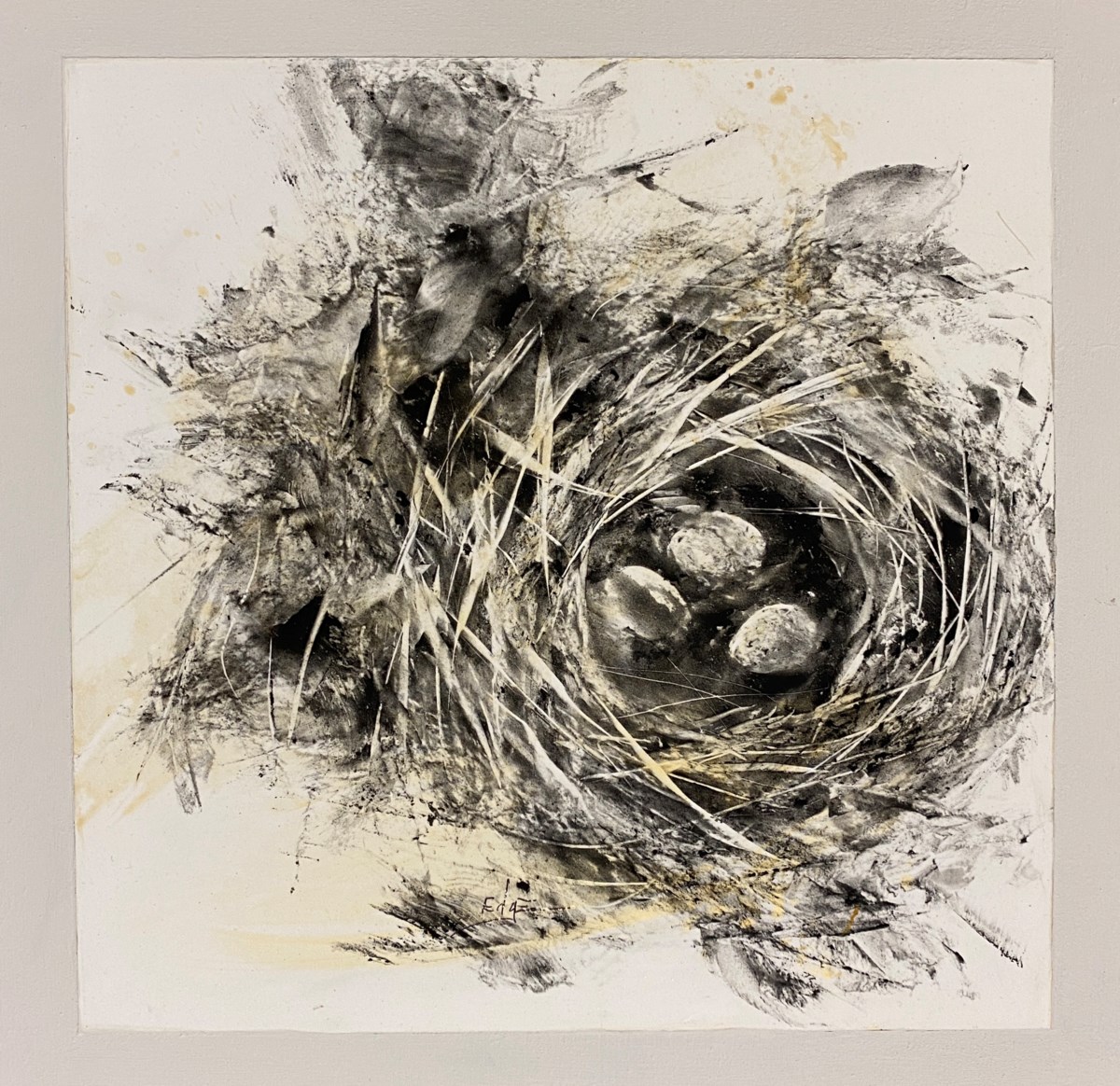 Nests from around the world have found their way into the studio and paintings of Marney-Rose Edge, the only New West artist to be part of Vancouver’s 2022 Eastside Culture Crawl.

2014 marked a turning point in the work of New Westminster artist Marney-Rose Edge. This was the year Edge began working at the historic Parker Street Studios in Vancouver; and it was also the year she immersed herself in painting nests – nests in which lay round, smooth eggs.

All will be on display in his studio during the 26th Eastside Culture Crawl, November 17-20.

The subject matter of nests was a far cry from the delicate flowers Edge was used to creating in oil, watercolor, and acrylic paintings; but there was something that drove Edge to create not just one, but an entire series of nests.

“I thought we [Edge and her partner] were going to be empty nests pretty soon,” she recalls when she did her first nest painting. Although his son didn’t move on until seven years later, in the meantime, Edge ended up creating a mini-series of 10 paintings that captured the emotion of being an empty nest.

To paint his first nest, Edge had bought a fake one from Garden Works; but since then, she says, “people have started offering me nests they have found either in their gardens or elsewhere.” She had two from Gambier Island, a Robin’s nest from Vancouver, and another tiny one that looked like it was made with “dog hair”, among other things.

A total of seven nests found their way to his studio without Edge having to lift a finger; and ironically, despite all efforts to attract birds to her own garden, she has found no nests in all these years.

Born in New Zealand, Edge traveled and lived around the world – in Australia, England and Chicago – before settling in New Westminster. “It was so much like New Zealand to me. I didn’t need to go anywhere else,” she said.

In 2003, she bought a house here built in 1937 and over the years has filled it with porcelain dolls, Victorian handbags, parasols, mason jars, Czechoslovakian cat glass jewelry , christening gowns (from the Edwardian and Victorian eras), vintage sewing kits and old Victorian hats. “I probably have close to a dozen hats hanging on the wall and some are also children’s hats that I found (some from the 1800s).”

“I’m an old soul, there’s no doubt about it,” said Edge, who worked in the printing industry before taking up painting in her 40s.

Outside the house, she designed her garden to attract more bees and birds. Drawing inspiration from the garden of his childhood home in New Zealand – filled with citrus, apricot, grape and black, white and golden peach trees in the garden, and flowers out front – Edge planted 17 fragrant roses, summer lilacs, peonies, roses, camellias, sweet peas and honeysuckles; and build a greenhouse to grow tomatoes, peppers, lettuce, beets, radishes and more.

She spends considerable time looking at vegetation and flowers through a window in her kitchen – “just to see what’s going on and what’s changed”.

But to date, she has never seen a bird build a nest there.

“We have been dying to have a hummingbird nest in our backyard because we have hummingbirds all year round.” But no nests. “They are so elusive.”

Edge made up for the lack of nests in his backyard with an increasing number in his studio. The biggest work Edge did this year was the nest paintings, she said.

“I love painting eggs. They’re just incredibly sensual, the curvature of the egg…the feeling of this translucency of an eggshell is like the petals of a flower when the light shines through,” she added.

“It is also the symbol of a new life. It’s like a gift of life that comes to us when I have these eggs around me.

You can experience Edge’s Nests at 320, 1000 Parker St., Vancouver, from Thursday, November 17 through Sunday, November 20, as part of the Eastside Culture Crawl.