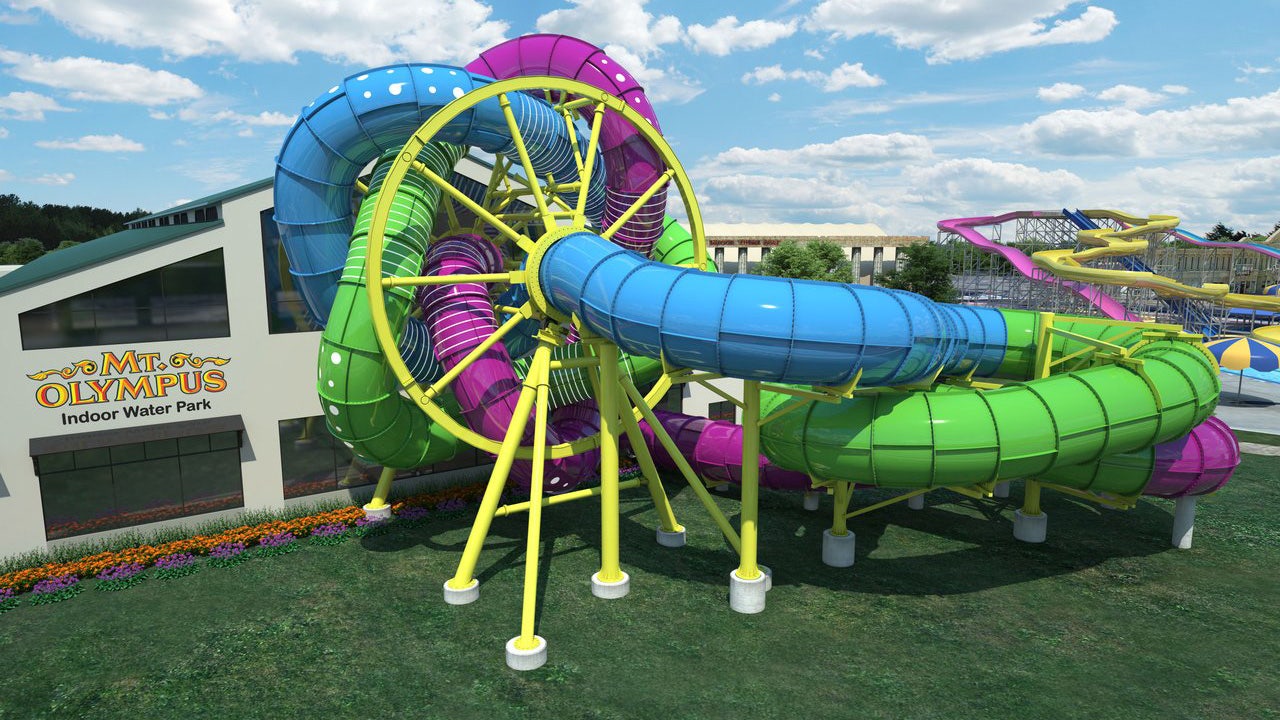 WISCONSIN DELLS, Wis. – Wisconsin, the self-proclaimed “Waterpark Capital of the World,” announced on Wednesday, March 9 that it will bolster its reputation in 2022, with the opening of several major new waterparks. Among them is the first rotating water slide in North America.

This summer, Mt. Olympus Water & Theme Park Resort will open Medusa’s Slidewheel, America’s first rotating waterslide. Combining the movement of a Ferris wheel with the speed of a waterslide, it is placed on a horizontal axis, rotating as guests slide through it.

Medusa’s Slidewheel is the centerpiece of the resort’s expanded indoor water park; the 22,500 square foot addition will include a new children’s splash area with fountains and a variety of interactive water features and a swimming area.

In fall 2022, the Wild West Indoor Water Park at the Wilderness Resort will open two new “dueling” slides: a two-lane tube and a two-lane head-first treadmill. Each will feature multiple rally points where racers can view their competition as they race down the slides, as well as translucent slide effects.

The Wild West Waterpark is also getting a new themed multi-level play and spray structure as the resort completes renovations to all 446 rooms.

Chula Vista Resort is opening a new waterslide attraction at its indoor water park that sports a rainbow stripe effect. Sliders inside the new tube will experience a multi-shade light effect that creates dazzling visual movement inside the otherwise dark channel.

The Land of Nature

A new natural adventure park development called The Land of Natura is set to open its first phase in the summer of 2022. This 40-acre parcel will feature a 5-acre naturally filtered lake with America’s largest floating water park and the longest canopy tour in North America. Over 10 miles of hiking and biking trails through the woods, river beach access and kayak rentals, a greenhouse visitor center with native plants, and food trucks serving local specialties are also included in this initial phase. Full development is expected to take three to five years at an estimated total cost of $60 million and will span over 150 acres.

Downtown Wisconsin Dells will soon have a new gathering place, with the addition of the 35,000 square foot Elm Street Plaza slated to open in late summer. It will include an indoor stage, special lighting and sound systems, concession stands, seating, Wi-Fi and a mural wall. There will also be interactive water features, including a six-foot Kugel balloon, dancing fountains and sunken geysers. Scheduled programming includes free nightly entertainment throughout the warmer months, farmers markets, pop-up markets, seasonal celebrations and other events.

Downtown Wisconsin Dells will host the Yeti Yard Next Level Adventure Park later this summer. The park will include the Himalayan Speedway, with a 640-foot elevated race track for go-karts. An 18-hole all-grass mini-golf course will complete the Yeti Yard on the ground floor.

New Nano-Brewpub in an old mansion

A taste of Norway

Also new this year is the Koselig Garden, a restaurant/dining room in the Norwegian-inspired Vennebu Hill barn. Boasting hillside views of the Wisconsin River and the Baraboo Bluff range, it offers a menu of popular Norwegian and Wisconsin delicacies as well as a full bar. (“Koselig” means “cosy garden” in Norwegian.)

Kalahari Resorts & Conventions has added a new watering hole, Redd’s Piano Bar. In addition to live entertainment, it has an enormous wine list and craft cocktails.

Gas prices across the United States are catapulted. The national average is above $4.00 a gallon, up more than 40 cents from a week ago. They could go even higher.