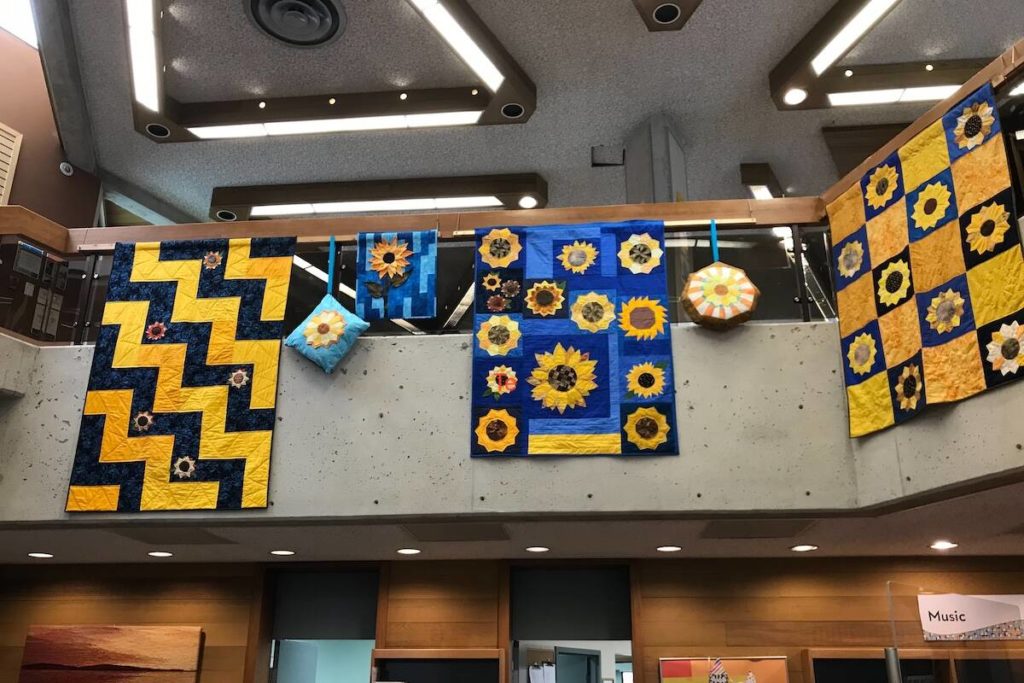 The Marvelous Makers, a group of 11 quilters of all skill levels, have created seven sunflower quilts in support of Ukraine which are on display at the White Rock Library until the end of May.

Group founder Laura Shaw-Cremer said two of the quilts were up for auction at the White Rock Elks’ one-day fundraiser for Ukraine on Saturday, May 28.

Another has already been sold – bringing in $1,200 for the cause – and Shaw said the group is investigating formally approving a raffle for some of the remaining quilts.

All funds raised will be sent to Help Ukraine and/or Displaced Ukrainians.

The group, which began as an informal quilting class run by Shaw, expanded during COVID isolation measures, with weekly Zoom meetings every Monday morning.

Now that the restrictions are lifted, busy quilters have more and more opportunities to meet.

The group’s activities include collaborative projects and quilting tournaments, in which each member has the opportunity to make a distinctive individual contribution – including Shaw’s aunt in England, who joins Zoom meetings weekly and submits works to add to projects. .

For more information about the group or for details on purchasing a quilt, email [email protected]

It will be a party with a difference when well-known Peninsular musician Randy Schultz and his band, Nuvo Zydeco, celebrate his birthday, Saturday, June 11 at Legion Branch 240 Crescent (2643 128 St.)

The event, which begins at 7:30 p.m., will feature live dance music from Nuvo Zydeco, BC’s only band dedicated to authentic Louisiana zydeco music, as well as music from the premiere part of the Easy River Boys.

It is also a fundraiser to help a Ukrainian family that Schultz and his partner Sally will host – a mother and her seven-year-old son – who are due to arrive on the peninsula at the end of June.

“The proceeds from the evening will be split between covering the performers’ expenses and creating a financial offer for the family upon their arrival,” Schultz said. “There are no tickets for this event, so people should just show up.”

In addition to the $10 cover charge, it will also be possible to donate directly to the Ukrainian family, he added.

The Legion requires proof of vaccination to be presented upon entry. For inquiries and more information about the event, call 604 721 0872.

Upcoming shows include Incognito, featuring frontman Rob Montgomery’s spirited guitar work and Nadine States’ dynamic vocals (May 27); the authentic sounds of the 1920s and 1930s of the Gatsby era from this group of reporters, Alexander Browne and his Boulevardiers, (June 3) and a brand new group of R&B, soul and funk, The Cracker Jacks, with the voices of David Wills and Vicky Alb, the horn section of Elliot Clarkson, Greg Farrugia and Garth Balint, and the powerful rhythm section of John McCreath, Ross Langbell, Jim Widdifield and “Tambelena” Butler (June 10).

On June 17, it’s the turn of keyboardist Billy White and the Rockettes, with singers Carol Mason and Roxane Brown, followed by guitarist/vocalist Jon Gale’s Gale Force Blues Band, specializing in modern Chicago-style blues as well as classic rock and R&B.

Shows are at 8 p.m. and tickets for all shows are $20 each, available at the door, online at brownpapertickets.com, on the website, club240.ca, or by calling the Legion box office at 604 -535-1080 (proof of double vaccination required for admission).

For those unfamiliar with his music, this is the recording and performing handful of Christopher Luedecke, of Chester, Nova Scotia, two-time winner of a JUNO Award and multiple East Coast Music Awards. , and also nominated for the Polaris Prize.

Toronto-born Luedecke, who has made major appearances at Canadian, Australian and UK festivals and performed with Feist, Bahamas, Tim O’Brien and Rose Cousins, has built a following with his unique, uncompromising music. and is now firmly established. into the upper echelon of Canadian folk artists.

Since 2004, he has traveled the world playing in festivals, theaters and clubs. He delights his audience with sincere mastery of the stage, inspired banjo picking and ironic storytelling, which goes to the heart of everyday and extraordinary experiences.

For tickets to live studio and streaming performances, visit bluefrogstudios.ca