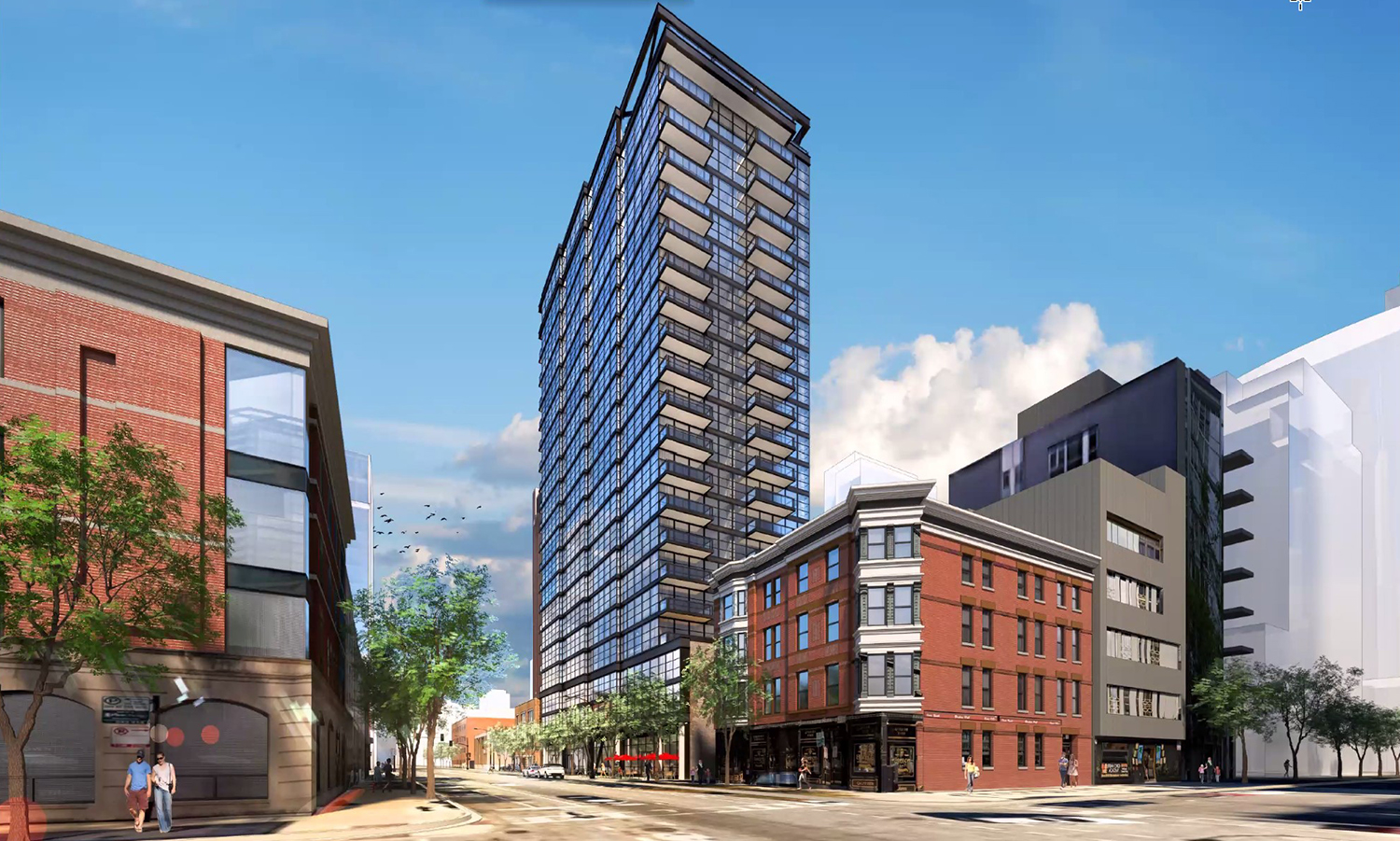 Today in culture, July 19, 2022: RIP Claes Oldenburg | The Lookingglass Theater celebrates its 35th anniversary | How to get a free bike

“Taking ordinary objects like hamburgers and household items, Claes Oldenburg sculpted them into unusual, often imposing dimensions – what he called his ‘Colossal Monuments,'” reports The New York Times. His Chicago sculptures include the 101-foot-tall “Batcolumn” on Madison in front of the Social Security Administration Building. “His father, a diplomat, was posted in London, Berlin, Oslo and New York before being appointed in 1936 Swedish consul general in Chicago, where Claes grew up and attended the Latin School of Chicago.” After studying at Yale, “he returned to the Midwest to study at the Art Institute of Chicago in the early 1950s with painter Paul Wieghardt, a student of Paul Klee…During his early years at art school, M Oldenburg works for the City News Bureau in Chicago, where one of his jobs was drawing comics. He was the only major artist associated with Pop Art to draw comics professionally.

“Citing a budget shortfall and declining enrollment, the Maryland Institute College of Art announced broad staff layoffs just weeks after workers … voted to unionize and two days after the union asked management to refrain from making unilateral changes to their working conditions without engaging in negotiation,” reports Artforum. “The restructuring is expected to eliminate approximately ten percent of the union’s bargaining unit prior to initial contract negotiations.”

Bikes offered by the city

“The Chicago Department of Transportation has set an ambitious vision to make bicycling a safe and affordable option for more Chicagoans. In addition to connecting bicycle networks and increasing the number of miles of low-stress, protected bicycle paths in the city, CDOT will help more residents cycle through a bicycle distribution program,” announces CDOT. on its website. “CDOT will distribute 5,000 bicycles, along with safety and maintenance equipment, over a four-year period to age- and income-eligible residents. For the first year of the program, bikes will be distributed to participants in the CDOT 2022 mobility programming (Green Corps, Learn to Ride, and Open Boulevard Events), and on a first-come, first-served basis for residents who qualify. Depending on demand, the City may set up a lottery for years two through four of the program for residents who qualify. » Until August 4, apply here.

“Partial site cleanup has begun for a twenty-one-story mixed-use tower at 741 North Wells in River North,” YIMBY Chicago reports. “Planned by Vista Property Group, the development will fit into a historic three-story brick building at its northwest corner bordering the intersection of West Chicago and North Wells.”

“Construction on a long-delayed project to turn a historic Noble Square church into condos will begin as soon as the city grants a key permit,” Block Club Chicago reports. “St. Boniface Church, 1358 West Chestnut, was purchased in 2016 by STAS Development Chairman Michael Skoulsky, who pledged to convert the church and empty land adjacent to it into dozens of residential units … Fourteen of the church’s eighteen condos are under contract.

“The Long Grove Covered Bridge was again struck by an oversized vehicle on Saturday morning,” the Trib reports. “Officials say this is the 35th such incident in 23 months since the historic bridge was rebuilt, averaging 1.5 accidents per month.”

Potbelly gets ten million PPP loans canceled after all

“Taxpayers will cover Potbelly’s $10 million PPP loan,” Crain’s reports. “After warning that the SBA may not forgive the 2020 loan, Potbelly revealed that the agency has approved the company’s request.”

“A Save-A-Lot in Auburn Gresham that closed in 2020 could reopen by the end of the year. The city announced Monday that it will provide a $13.5 million grant to Yellow Banana, a grocery company owned by Cleveland-based investment firm 127 Wall Holdings LLC, to reopen the store and invest in other Save-A-Lot locations,” the Tribu reports. “Yellow Banana plans to use the funds in combination with private funds to reopen the Auburn Gresham store and acquire and renovate five other Save-A-Lots it operates on the south and west sides of the city.”

Praise and Change at Bronzeville Winery

“Bronzeville Winery just lost its opening chef, Whitney McMorris, who made an impressive start after working at The Aviary among other notable restaurants in town. ‘this fall, with a few summer specials, according to Cecilia Cuff, co-owner with Eric Williams, also owner of The Silver Room,” wrote Louisa Chu in a hosanna to the Trib. “Two years in the making, celebrating its grand opening on the 20 April is the culmination of a hundred years of community culture, and it cries out from and into the future.

‘No’ for the grand opening of the Chatham cinema

“The owners of Cinema Chatham, 210 West 87th, hope to bring locals to the theater on July 21 to catch the director [Jordan] Peele’s latest film, “No,” reports Block Club Chicago. “The grand opening celebration this month [after the earlier soft opening] will highlight the latest renovations to the theater and, [he hopes]bring people back to the movies, owner Jon Goldstein said.

“Why are there so few librarians in Chicago public schools? »

“The third-largest public school system in the nation with 290,000 students in 513 district-operated non-charter schools, CPS revolves around ninety schools with full-time librarians, staff and budget records show. That leaves more than 400 without school, including about eighty-two percent of elementary schools,” Nader Issa writes to the Sun-Times. “There are librarians in only ten percent of schools where black students make up the largest percentage of the student body, compared to twenty-five percent of schools where white children are and twenty-one percent where Hispanic students are the most numerous… The downfall of school libraries over the past decade has been precipitous.

“Imagine working on your novel on your personal computer. It’s almost done; you’ve already written about a million words. Suddenly, the online word processor tells you that you can’t open the draft anymore because it contains illegal information. In an instant, all your words are lost,” writes Zeyi Yang at MIT Technology Review. “This is what happened in June to a Chinese novelist writing under the pseudonym Mitu. She was working with WPS, a domestic version of cloud-based word processing software…Mitu accused WPS of having “ spied on and locked my draft,” citing the presence of illegal content… A few prominent influential accounts picked it up late. It became the top trending topic on Weibo that day, with users wondering if WPS carries invasion of their privacy Since then, The Economic Observer, a Chinese publication, has reported that several other online novelists have had their drafts locked for unclear reasons in the past.

Messages from Rick Perlstein“On behalf of my colleagues on the board of directors of In These Times, I am saddened to learn of the passing of my friend David Moberg, whose radical journalism shone for more than forty years. Honor it in the best way a writer can be honored, by reading it. Writing by the editor, who had been with In These Times since its founding in 1976, is here.

The Lookingglass Theater Company kicks off its thirty-fifth season with “a transcendent summer sunset ritual that brings us together by the water” on July 27 at 7 p.m. “Through music, movement and word, the Lookingglass Theater commemorates the beginning of the Chicago Race Riots in 1919, peacefully honoring the lives of black people affected by the deadly race attacks that swept the nation that summer.” “Sunset 1919” is a free community event, open to the public. Featured artists include spoken word artist avery r. young, choreographer Cristal Sabbagh, musician-composer Edward Wilkerson Jr. and DJ Lady D. More here.

The Center for Decision Research at the University of Chicago Booth School of Business celebrates the one-year anniversary of Mindworks: The Science of Thought, the world’s only interactive discovery center and lab dedicated to behavioral science. Mindworks will celebrate July 22-24 with a full weekend of activities, including free door prizes and raffles, pop-up exhibits, guided tours, and live music at 224 South Michigan. In its first year, Mindworks welcomed more than 10,000 visitors from forty-one countries, six continents, and all fifty US states to participate in research studies and learn to apply behavioral science insights. “With free admission and a prime location across from the Art Institute of Chicago, Mindworks is quickly becoming one of the city’s must-visit cultural destinations,” the group said in a statement.

Cryptocurrency: a danger for the black community?

“Cryptocurrency is hot, especially for African Americans. I’m still trying to figure it out,” Laura Washington wrote to the Trib. “About forty-four percent of Americans who trade in cryptocurrency are people of color, according to a survey conducted by NORC at the University of Chicago. More than a third of participants in this June 2021 survey have reported annual household incomes below $60,000…Crypto investing is a twinkling ornament on what could be a rotten tree.The industry has been criticized for its lack of regulation, transparency and consumer protection. digital system makes it very vulnerable to fraud and crypto scams proliferate.