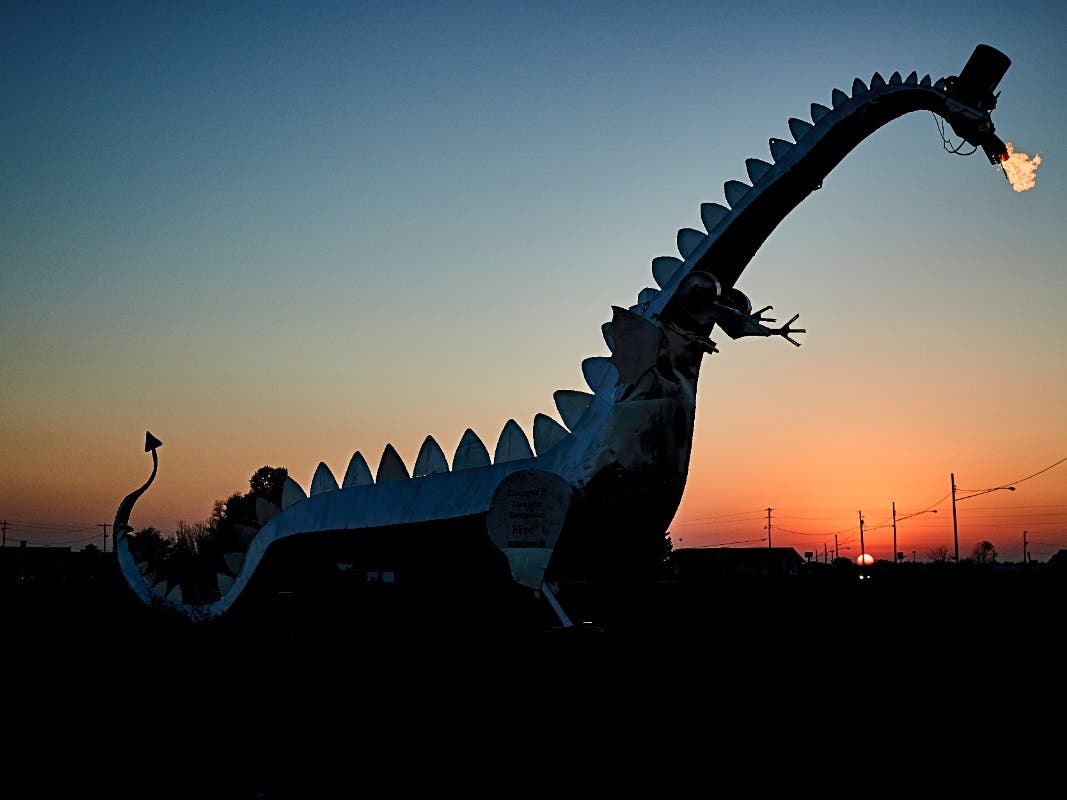 ILLINOIS – Illinois is home to exciting cities like Chicago, stunning natural beauty in places like Starved Rock, and plenty of places to eat, hike, and road trip. It is also home to an eclectic mix of roadside attractions.

If you’re heading out on a summer trip with the family, here are some of the most eye-catching, awe-inspiring, and just plain weird roadside attractions the state has to offer.

Located in Vandalia, Illinois, about a four-hour drive from Chicago, is the 35-foot-long fire-breathing dragon Kaskaskia, “a tourist attraction as pure as a princess in a fairy tale,” according to the Illinois Office of Tourism. Travelers can exit the highway and insert a token to see the dragon “breath” fire as its eyes glow red – $1 for 10 seconds of flame shooting fun. Visitors can also stay in the Kaskaskia Dragon RV Park and “buy dragon stuff,” according to the website.

Those traveling historic Route 66 can stop in Wilmington for a bite to eat and see the Gemini Giant, which, according to Launching Pad restaurant co-owner Holly Barker, is a “peace officer…came to spread the word.” peace in the world”. The 28-foot-tall “Muffler Man” prop is named after the Gemini space program. He originally kept the The Dari-Delight restaurant, opened in 1956, and is now known as Launching Pad, specializing in burgers and hot dogs. Although you can see the Gemini Giant anytime, the launch pad is open from 10 a.m. to 7 p.m. daily, but closed on Thursdays.

Head to Collinsville, Illinois to see the “World’s Largest Official Ketchup Bottle”, first built in 1949 by the WE Caldwell Company to supply water to the “Brooks old original rich & tangy catsup” below. For more than 70 years, the 170-foot-tall water tower has wowed visitors. In 1995 the monument was saved from demolition and restored to its original appearance. In 2002, Brooks Catsup Bottle Water Tower was named to the National Register of Historic Places.

When it comes to roadside attractions, Illinois is big on giants. Another of the Route 66 “Muffler Man” statues, this one is named after Paul Bunyan – but intentionally misspelled “Bunyon” to avoid copyright issues. It was installed above Bunyon’s hot dog stand in Cicero in 1966, according to Atlas Obscura. Today it stands in front of the temporarily closed Palms Grill Café and tempts travelers with a delicious hot dog — which this version of Paul “Bunyon” is holding instead of an ax — in Atlanta, Illinois.

5. Big things in a small town

We weren’t kidding – Illinois really loves its giant roadside attractions, and Casey, Illinois is your one-stop-shop for all things oversized. Just off Interstate 70, Casey is famous for its giant artifacts: a 30-foot golf tee weighing 6,659 pounds, a 32-foot-long pencil, and a 32-foot-tall mailbox where you can actually send mail, according to Illinois. Tourist Office. It is also the site of several Guinness World Records, including the world’s largest wind chime, rocking chair, pitchfork, knitting hook/hook, wooden shoes and largest bar/swizzle spoon, to name a few. The giant record holders are the work of local businessman Jim Bolin.

Head to the real-life Southern Illinois metropolis, which was licensed by DC Comics in 1972 to be known as the “adopted home of Superman.” Since then, the city’s connection to Superman has only grown. A 15ft statue of Superman stands in front of the courthouse, and a festival celebrating the superhero takes place in June. This year it is from June 10 to 12. According to the city’s tourism website, “Located at the southern end of Illinois, on the Illinois and Kentucky border, at the intersection of Interstate 24, US Highway 45, and IL Highway 145, Metropolis offers the best of small town America.”

More things and places to see

Roadside America also has a list of notable places and things to see while road trip in illinoisincluding but not limited to):

Other ideas for summer trips here in Lincoln Country: